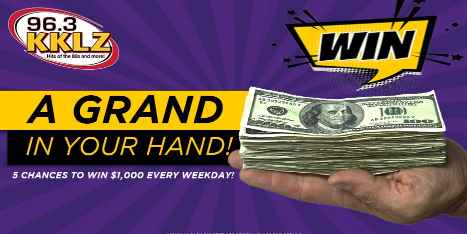 96.3 KKLZ brings you the Grand In Your Hand Beasley Media Group Fall 2018 Nationwide Contest where they will be giving away $1,000 cash prize 5 times a day.

To participate in the Contest: Beasley Media Group station listeners will need to listen to a participating Station each weekday during the Promotion Period at 8am, 11am,1pm, 4pm, 6pm eastern time or 5am, 8am, 10am, 1pm, 3pm pacific, when at each time a Cue will be announced. The Cue will include a unique Key Word. Upon hearing the Cue, enter by entering the Keyword on the station’s mobile app or by entering online at 963kklz.com/contests no later than fifteen (15) minutes after the start of the hour during which the Cue is announced to be entered for a chance to win a $1,000 cash prize. Good Luck All