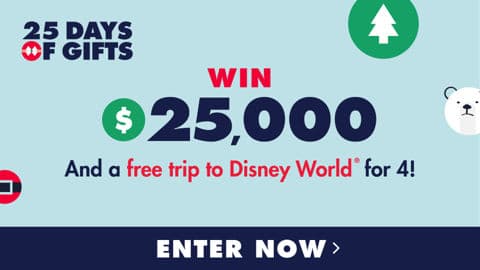 Enter Freeform 25 Days Of Christmas Sweepstakes 2022 for your chance to win 1 of 76 daily prizes and one grand prize winner is going to receive $25,000 cash prize and a trip for four people to Disney world.

How To Enter: Go to this link:Dmrholiday.com during the sweepstakes period and follow the online instructions to register by entering all information requested on the registration form and once you filled out the entry form now Click on the submit button to complete the registration form.

Who Can Enter: Open only to legal residents of the 50 United States and District of Columbia who have reached the age of 18 years old at the time of entry.

One lucky grand prize winner will win $25,000 cash prize and a trip for four people to Disney world and also their are 76 Daily Prize winners.